The meadow areas at Clandon Wood are managed as traditional hay meadows. This type of farming has almost vanished from the UK and is now so rare that when Clandon Wood was sown in 2013 the total area of English lowland meadow increased by 1%.

In spring the young grass is allowed to grow long – we only mow paths and the edge of vehicle tracks. Around April-May the hedges and trees burst into flower; blackthorn, cherry, hawthorn and elder succeed each other until June. By May the early meadow flowers are in bloom and the uncut grass has built up the energy to flower in June as the many species take turns casting a profusion of colours across the 3-feet high sward. The dry weather in July and August will turn the meadow golden as it dies back and the seeds ripen.

Once the seeds fall the fields are ready to mow. Around August to September they are cut and made into hay and a myriad of birds arrive to feed on the spoils. The ground is turned golden brown with just the trees and neighbouring woods still green around the margins.

By the time the leaves fall the grass is green again and sheep are brought in to graze the fields. They bring diversity to the bareness of winter – closely followed by gaggles of birds picking up food behind them as they graze preferring some plants and places over others to enhance the patchwork effect of the grounds and set the scene for the new year.

Clandon Wood through the seasons 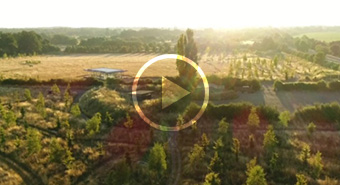 The open spaces at Clandon Wood are managed through the year as traditional hay meadows. This type of land stewardship is now so rare that when Clandon Wood was first sown the total area of English lowland meadow increased by 1%.

At Clandon Wood we firmly believe that providing an environment for the bereaved is just as important as it is for those who have passed away. In this regard we hold a number of ‘aftercare’ events throughout the year for those left behind.

These include our monthly tea, cake and company drop ins which provide an opportunity for anyone who has been bereaved to be among and talk to others who share the experience of loss.

Held in our beautiful glass pavilion they take place from 10.30am to 1.00pm on the last Sunday of every month.

Simply drop in - whether or not you have a loved one at Clandon Wood, you will always be warmly welcomed with kindness, consideration and company.